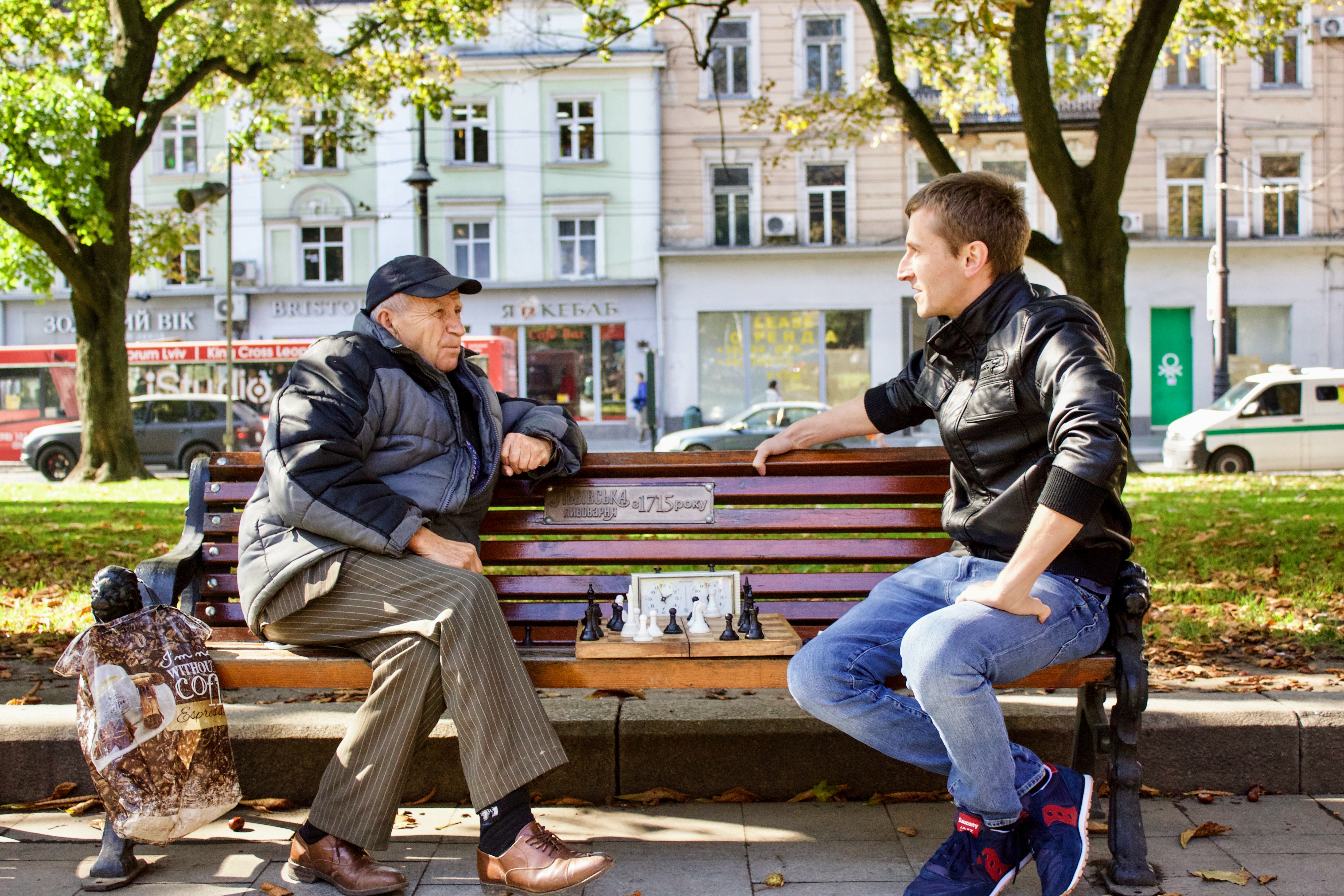 During the excursion we had some unusual, impromptu encounters with a variety of people from a great many backgrounds; this made the topic of our excursion more real because it showed us that the concept of contested pasts is still prevalent in both Ukrainian and Polish society today. Below are some examples of these such encounters.

We arrived in Lublin by plane after some delay, on a crisp winter evening, where we then chartered a van to drive us across the Polish-Ukrainian border and into Lviv. In contrast to our experience of arriving in Poland – an EU member state – the process of leaving the EU was far more complex. On approaching the border, we were greeted by long queues of traffic. Many of us had little experience crossing borders, let alone by van, and it was particularly fascinating to experience the act of ‘physically’ crossing this threshold. It was a lengthy procedure, which took over three hours. Crossing the border in this way, by van, prompted many of us to realise that travelling outside of the EU is a tedious process. After gaining knowledge on contemporary borders we were presented with a concrete example of the actual border. The discourse on the EU border is very present in both European and international political discussions, sparked by the recent surge in migrational flows from troubled regions into the EU.

During a presentation at the Bandera monument, which you can read more about within Juliëtte’s page, we were interrupted by a man, a soldier on leave, vehemently expressing to us in Ukrainian his opinions on the monument. Offering his nationalistic view on the political situation in Ukraine, followed by a Nazi salute, it was very clear that the man idolised Bandera. It further illuminated to our class the notion that the monument is still highly controversial, particularly given Lviv’s unique experience of the Second World War, and continues to arouse nationalistic sentiments for certain groups.

Couple at the Space of Synagogues, Lviv

Whilst the presentation at the Space of Synagogues was taking place, a couple was listening intently to what was being said, which you can read more about on Nazlu and Martina’s page. Afterwards, they approached us to share their feelings on the site and told us that they were in fact descendants of Jewish residents that lived in Lviv before the Second World War. As many Israelis often do, in recent years, they were visiting the old living space of their ancestors. Next to academic accounts of Jewish heritage in Eastern Europe, it was good to hear a more personal account on such a painful past.

While our class was visiting the former Janowska campsite, which you can read more about in Bram and Jelmer’s page, a freelance American journalist approached us with some questions on what we were doing there. He told us that he had recently completed some archival work in Germany and was currently writing a story on the campsite. We visited and discussed the site together, exchanging both experience and insight. In one particular anecdote, he revealed to us that in a previous visit to the site, he experienced a tense confrontation with the prison guards after attempting to photograph the prison grounds. He also attempted to show us what he believed to be the former guard’s barracks and moreover, what he believed to be the former death ground. The journalist remained with our group as both Bram and Jelmer took our class to the location of the mass burials. During this time, it was revealed that they had discovered two bones, though it could not be established if they were human. On our way out of this area, the journalist went back into this part of the former camp before departing from our group. Some of us discussed the possibility that he had perhaps taken the bones for his research, though of course this could not be confirmed. It was a curious encounter nonetheless. Although in Lviv we encountered little local knowledge of the campsite, this encounter showed us that Janowska remains a site of interest to the international community, despite minor local awareness.

Finally, we met with bachelor students from the newly established Ukrainian Catholic University, who were interested in this topic. The students, most of whom were not originally from Lviv and some of whom who were not Ukrainian, had many different insights on Lviv’s contested past, including the ways in which this past is discussed in present day Lviv. In particular, one student voiced his opinion that he couldn’t relate with neither Ukraine’s past nor it’s present, due to the current politics and the conflict going on in the East of the country; he didn’t feel Ukrainian at all. This sparked an interesting discussion on the current politics, what it meant to be Ukrainian and how the younger generation is looking for a national identity they can identify with. Not only this brave student that dared to speak out what seemed to be on everyone’s lips, but most of them told us afterwards that they can not relate to the current way the country is governed, the representations of the past or the heroes that come along with it. More observations about looking for an Ukrainian identity you can read on the page of Sanne.