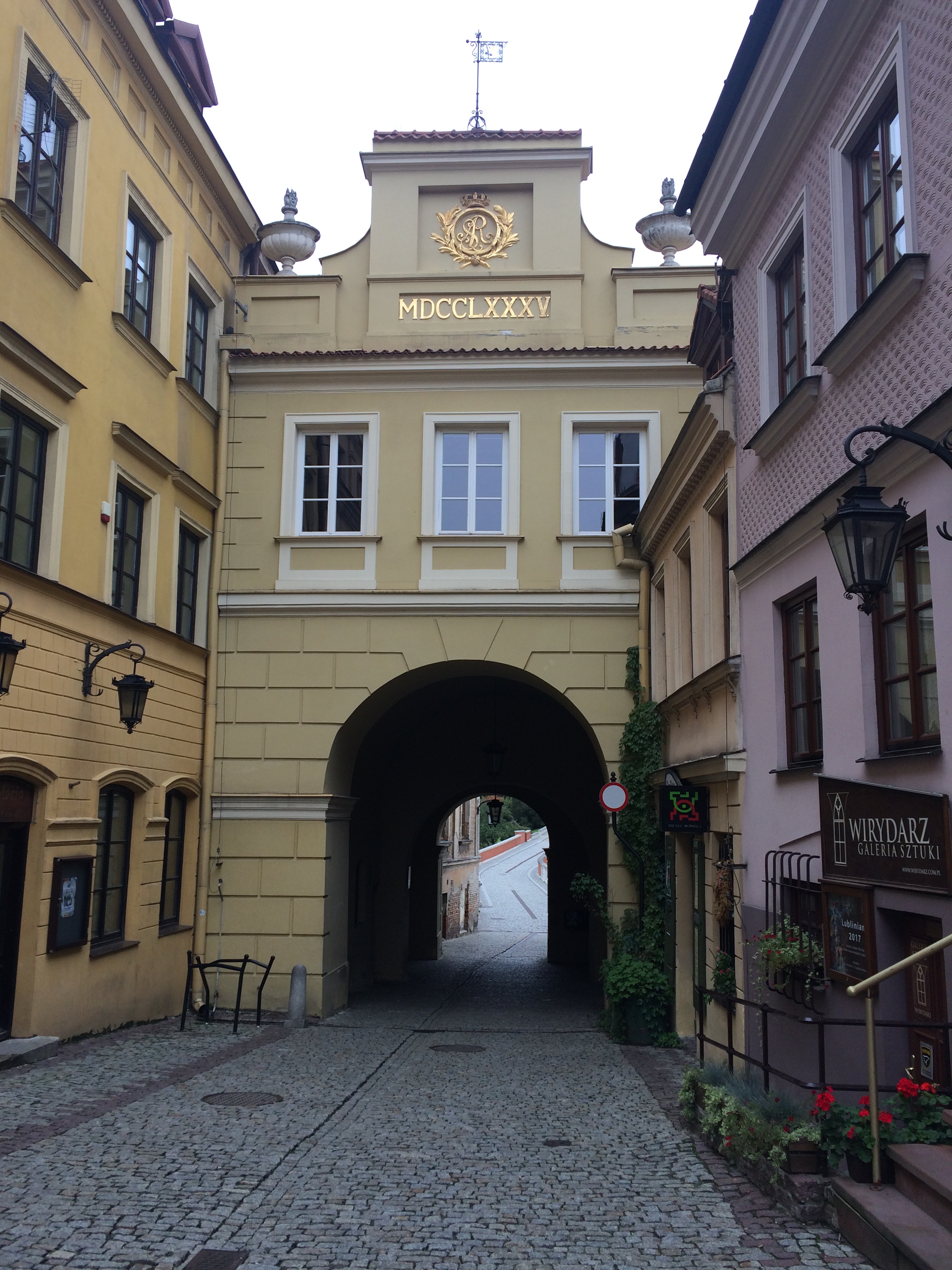 “Whoever Saves One Life, Saves The World Entire” – A Discussion of the Righteous Among Nations in Poland Through the Prism of the Grodzka Gate

On Monday 9th October 2017, I visited the ‘Grodzka Gate – NN Theatre Centre’ as part of the MA Heritage and Memory Studies group excursion. Before visiting, I had researched the institution, its location and background. In this blog, I will discuss the history of the site, its context, as well as the permanent exhibition which can be found on the site. My research focus for the visit was primarily on the Righteous Among Nations, and this will also be discussed here in terms of my expectations of what I would experience at the site versus what I did experience while visiting.

In the podcast below, I explain a brief history of the site and the institution housed there, as well as my main interests in the site.

The ‘Grodzka Gate – NN Theatre Centre’ was established in 1992 when a group of theatre enthusiasts entered the then derelict building of the Grodzka Gate and decided to take over the building for theatre performances. The Centre is a cultural institution that focuses on the lost Jewish cultural heritage in Lublin and works to tell the story of what happened to the Lublin Jews. As told by the tour guide, the institution was the first cultural institution to be established in Lublin post-1989. Their activities are carried out in connection with the city and its citizens, thus persuading them to find value in the work that the institution does. In this way, local stakeholders are involved in the activities of the institution. The tour guide explained how visitors are always guided around the exhibition space rather than being allowed to visit independently. In this way, the tours are in keeping with the theatre enthusiasts who founded the institution as they retain an element of performativity and agency.

The Grodzka Gate is also known as the Jewish Gate that historically was used as a passage from the Christian to the Jewish part of the city. Interesting for the research theme of the group’s excursion, that of Border Heritage, the Gate can be seen to have joined the two parts of the city or to have separated them. While at the site, the tour guide showed us a huge model of the pre-war city of Lublin and pointed to the locations of Christian churches and the Jewish synagogue. In the guide’s narrative, the city was not separated by religion but rather the two religions seemed to co-exist. This is in stark contrast to Lublin’s present, as the former Jewish Quarter is now non-existent, having been erased during the systematic liquidation of the area by the Nazis during the Holocaust.

The full name of the site is the ‘Grodzka Gate – NN Theatre Centre’, whereby the ‘NN’ stands for the Latin meaning of ‘no name’ or unnamed. This is really the ethos of the centre and it can be seen in the first exhibition space. “I am the NN” is the story of a Jewish woman who survived the Holocaust in Lublin as a young child because a woman rescued her by taking her into her family. At this early point, my interest was sparked particularly regarding my research interest in the Righteous Among Nations. It was not mentioned whether the woman in the story had been awarded the Righteous Among Nations medal for rescuing the young child or not. This made me question how many rescue stories have been left unrecognised, or even untold and unheard.

Similarly, my interest was sparked due to the size of the information panel containing the “I am the NN” story. The information panel comprised of a huge poster amounting to the same size as the wall on which an old photo of Lublin was printed. The story was printed onto a moveable panel which could be wheeled forwards in order to reveal the old photo of Lublin and its Jewish Quarter. The fact that the rescue story was printed in such large scale shows that the institution is emphasising it as their ethos of supporting Jewish people who feel that they have lost their identity. The scale of the poster also emphasises the rescue story and good-willed non-Jewish citizens willing to risk their lives to help Jews.

‘Lublin. Memory of the Place’ Exhibition

The exhibition space has been curated in a way so as to make it appear like the inside of an archive. It has metal boxes on the walls and shelves upon shelves of folders containing documents on the 43,000 Jews who were killed during the liquidation of the Jewish ghetto in Lublin. The tour guide outlined to us that the institution does not purely focus on numbers and figures but rather on contexts.

Having been confronted with the large-scale poster containing the “I am the NN” story, I had expected that the exhibition would focus perhaps entirely on rescue stories, both those who were rescued and the rescuers. However, this expectation was not met. Instead the majority of the exhibition focussed on the Jews of the former Jewish Quarter in Lublin and it was only until the final room of the exhibition, that my expectations were met. Located high up in the attic of the building is the room dedicated to the Righteous Among Nations – non-Jewish people who rescued Jews during the Holocaust. The transition from a very darkly-lit room to a very bright, white room re-enacts the title of the exhibition space here: “Lights in the Darkness”.

“Lights in the Darkness”: The Righteous Among Nations

Firstly, it is important to discuss the exhibition’s location in the top-most room or attic of the building. Why was this room chosen? Being the top-most room in the building, it could be argued that the room is closer to the heavens, insinuating that the people honoured here are considered heavenly or even saint-like in their actions of saving Jews. Otherwise, the most obvious comparison that comes to mind is the attic in which Anne Frank and her family hid during the war. As Anne Frank is widely viewed as a national hero in the Netherlands and in the wider Holocaust narrative, the location of the Righteous Among Nations exhibition in the attic situates the Lublin rescuers alongside the narrative of Anne Frank, again emphasising their heroism. In this room, there are folders containing the information of the 257 Righteous Among Nations award holders from Lublin.

Rescuing Jews was an incredible risky undertaking and the tour guide highlighted how illogical it was. He explained that to be caught helping and rescuing Jews was punishable by a death sentence not only for yourself but your entire family. The Nazis thought that this shared punishment would dissuade and deter people from wanting to save Jews.

What does ‘Righteous Among Nations’ mean?

Righteous Among Nations is an honoured title used by the State of Israel. It describes non-Jewish people who risked their lives to save Jews from extermination by the Nazis during the Holocaust. A person who is recognised as Righteous receives a medal in their name, a certificate and also the privilege of having their name added to the Wall of Honour in the Garden of the Righteous at Yad Vashem. There are, of course, criteria that have to be met before a person is awarded with this title. According to the United States Holocaust Memorial Museum, the person’s motivation for rescuing the Jew must have been to save them, rather than being motivated by personal gain (1).

As of 1st January 2017, there are in total 26,513 men and women who have been awarded the title from 51 different countries. Interestingly, Poland is the country with the highest number of awards, with 6,706 awards (2) (Find out more here). Considering Poland had the biggest pre-war Jewish community and the fact that the Holocaust took place on Polish soil, this number is perhaps not surprising. It is, however, particularly interesting considering the punishment of death in the case of being caught.

The Righteous Among Nations is a particularly interesting research topic at this moment in time in Poland as there has been a rise in anti-Semitism in recent years. Prior to the Holocaust, the Jewish population made up around 10% of the total population of Poland. Today, Poland has a population of around 38 million people and the Jewish community is comprised of only 10,000 people (3). According to a study conducted by the University of Warsaw, the rise in anti-Semitism is attributed to growing anti-migrant sentiment triggered by the migrant crisis and also to a rise in Islamophobia due to migrants fleeing war-torn countries like Syria and Libya. Similarly, negative feelings towards Jewish people have been attributed to the current Polish government and its populist leader, Jaroslaw Kaczynski. His Law and Justice Party (PiS in Polish) has refused entry to migrants and refugees and has also closed communications with the official representatives of the Jewish community in Poland. You can read more about this here.

If this anti-Jewish sentiment is more visible in Poland today, then why does Poland still choose to emphasise the narrative of the rescue of the Jews? This question is poignant considering that the general feeling towards Jews, historically and currently, has been and is negative. Emphasising the rescue narrative not only emphasises those who were rescued but emphasises even more so the selflessness of the rescuers, and especially those awarded the Righteous Among Nations title by Yad Vashem in Israel. This hero and sacrifice narrative is important for Poland in the process of the working through of the events of World War II and has been a dominant frame to describe Polish-Jewish relations during the war.

Jan Gross’s controversial book Neighbours: The Destruction of the Jewish Community in Jedwabne, Poland, which was published in 2001 tells a different story to the narrative of the Righteous Among Nations focussed on by the ‘Grodzka Gate – NN Theatre Centre’ and the Polish government. It details the 1941 Jedwabne massacre in north-eastern Poland, which consisted of the killing of Jews by their Christian neighbours. The book caused great debate after its publication as it works to confront and reshape the memory of events during WW2, and prompts the re-working of them in today’s Poland.

Mentioning this book is significant to my visit to the Grodzka Gate and its cultural institution, as it highlights that the Centre chooses only to focus on the victims of the Holocaust and those who risked their lives to rescue them. Having visited, I remembered that there is, of course, another side to the story, that of the perpetrators; a part of the story which the Grodzka Gate does not tell. While there is a trend in memorial museums and cultural institutions in the Holocaust field to focus on the victims first and foremost, it is clear that interest in the perpetrators of events during the Holocaust is growing. This growing interest could have (further) impact on the ways in which events are remembered, commemorated, and memorialised in modern-day Poland, and in Europe as a whole.

The title quote “whoever saves one life, saves the world entire” is a main teaching in the Talmud. The quote is also said by Oskar Schindler in Steven Spielberg’s 1993 movie Schindler’s List.

(3) “Anti-Semitism seen on the rise in Poland”, Times of Israel, January 25th 2017,  https://www.timesofisrael.com/anti-semitism-seen-on-the-rise-in-poland/

To find out more about the history of the Grodzka Gate, go to their website: http://teatrnn.pl/about-us/

To read about the development of attitudes towards Jewish people in Poland look at: Joanna Beata Michlic and Malgorzata Melchior “The Memory of the Holocaust in Post-1989 Poland: Renewal – Its Accomplishments and Its Powerlessness” in John-Paul Himka and Joanna Beata Michlic (eds.) Bringing The Dark Past To Light: The Reception of The Holocaust in Postcommunist Europe, (Lincoln: University of Nebraska Press, 2013) p403-450