I can’t be the only one who has watched a strangers’ eyes glaze upon revealing the field in which I study. “Heritage? So…like…history? ….Why?” Indeed, oftentimes it seems that people have this perception that the study of heritage is the driest of disciplines, increasingly obsessed with the over-and-done-with past while remaining blissfully ignorant of the fascinating progresses of the present.

This is not the case, of course.

Now more than ever, the heritage field is seemingly ever more conscious of the opportunities presented by the modern age.

This was the subject of Bente Jensen’s presentation at the 2013 Digital Heritage International Congress entitled, “Instagram as Cultural Heritage: User Participation, Historical Documentation, and Curating in Museums through Social Media.”

What’s Love Cultural Heritage Got To Do With It?

However, I’d like to think I also use the app in more active and productive ways on occasion. Especially since moving from Canada to the Netherlands, Instagram has more than ever also become a way for me to digest cultural experiences and share these experiences with my friends and family back home. Several of my uploads have captured my visits to cultural heritage sites, such as Berlin’s Jewish Museum or Melk Abbey in Austria. And of course, geo-tagged locations are a necessary element of these uploads.

I mean- did you even go to the Louvre if you didn’t Instagram it????

I found Jensen’s articulation of Instagram increasingly interesting in terms of what she calls ‘participatory culture’ and how this relates to the museum world. 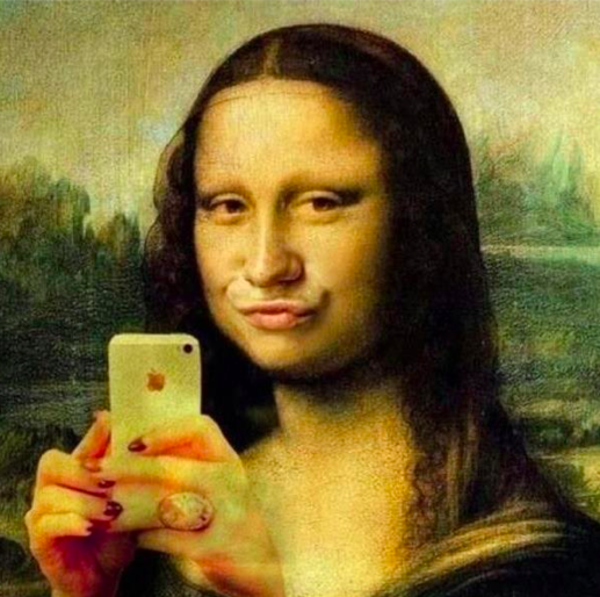 We live in an era in which a museum goer can snap a picture of Mona Lisa and upload it to Instagram with a caption such as “Is… that… it?” or “When a stranger tells you to smile”, throw on a hashtag and a geo-tag, and then just sit back and watch the likes roll in. And maybe, just maybe, someone halfway around the world might then say, “Hey, I’d like to see that for myself one day.”

In the words of Jensen, the Instagrammer has just played multiple roles, as a producer (of the Instagram upload), the consumer (of the artwork), and the mediator (between the museum and their Instagram followers).

Bjarki Valtysson, Nanna Holdgaard and Rich Ling in their article “The iPhone and its Use in Museums,” describe the ways in which the role of the museum in society is changing as a result of technology. Referring to Tony Bennet, the authors reinforce that the museum’s historical purpose was, “to enlighten and educate the public, while serving as the temple of the arts in an elitist fashion.” Beyond this, however, the museum, “served as an instrument of the disciplinary society,” where a contact zone between the social classes would be a means for the lower classes to learn the proprieties of the gentry.

However, in the modern era and with the advent of apps such as Instagram, this bottom-up power structure that museums have historically encompassed has been flipped; Valtysson, Holdgaard and Ling reflect on this notion, stating that:

“Buzzwords like user-generated content, produsers (a portmanteau of producers and users), and creative audiences are meant to indicate this shift from the individual as a traditional museum guest-as a passive observer. The goal has been to empower them into more active and participative users. ”

So how can museums use this technology and this power-shift to their advantage?

The answer: by encouraging the Instragrammer to take on the fourth role of co-curator.

Within her presentation, Jensen illuminates a variety of examples of the ways in which Danish museums and archives are using the Instagram platform to create new relationships with museum goers.

Denmark’s Aalborg City Archives did just that in 2013 when they created a hashtag campaign for users who might be interested in having their photo preserved in the City’s archives. 175 photos were submitted in response (an impressive number when one considers that the platform was only three years old at this time).

The Museum Den Gamle By in Aarhus also utilized Instagram as an archive-in-the-making, asking users to document a teachers lockout taking place in 2013, with the hashtag #lockoutiaarhus. Further to this, while creating an exhibition on contemporary popular music, the museum’s curators utilized the hashtag #spot2013 to discover how festival guests interacted.

What we can see in endeavours such as these is that social media has, in some ways, facilitated the democratization of the museum institution.  As Valtysson, Holdgaard and Ling state, “The political climate for Scandinavian museums has increasingly moved towards involving visitors in defining and contributing to the museum’s content production.” Instagram has thus enabled some institutions to jump several hurdles that museums have encountered in the last decades, such as inclusion and accessibility.

Beyond the opportunity to reach beyond the typical museum demographic, there are also a great deal of economic advantages for museums that embrace the potentials of social media (Hello- free advertising á la the Starbucks conspiracy theory). In their article “Heritage Tourism Entrepreneurship and Social Media: Opportunities and Challenges,” Marius-Răzvan Surugiu and Camelia Surugiu highlight this very economic factor stating that:

“Enterprises need to be more focused on technological innovation and take advantage of the proliferation of social media use. They need to use the new media (blog sites, Facebook pages, Tripadvisor, MySpace, Twitter, Flicker, Youtube, Instagram etc.) in order to improve brand equity, advertise, create additional distribution and booking channel, which are currently impossible to neglect in a competitive and globalized world.”

Of course, there will always be those who assert that the acceptance of social media platforms such as Instagram is just one step towards the Disneyfication of the museum institution. However, one has to ask what is riskier:

The answer seems simple enough to me- but then again, I’m a millennial.

Valtysson, Nanna Holdgaard and Rich Ling. “The iPhone and its use in Museums.”  in Creativity and Technology: Social Media, Mobiles & Museums, edited by James Katz, 98-120. New Jersey: Transaction Publishers, 2011.