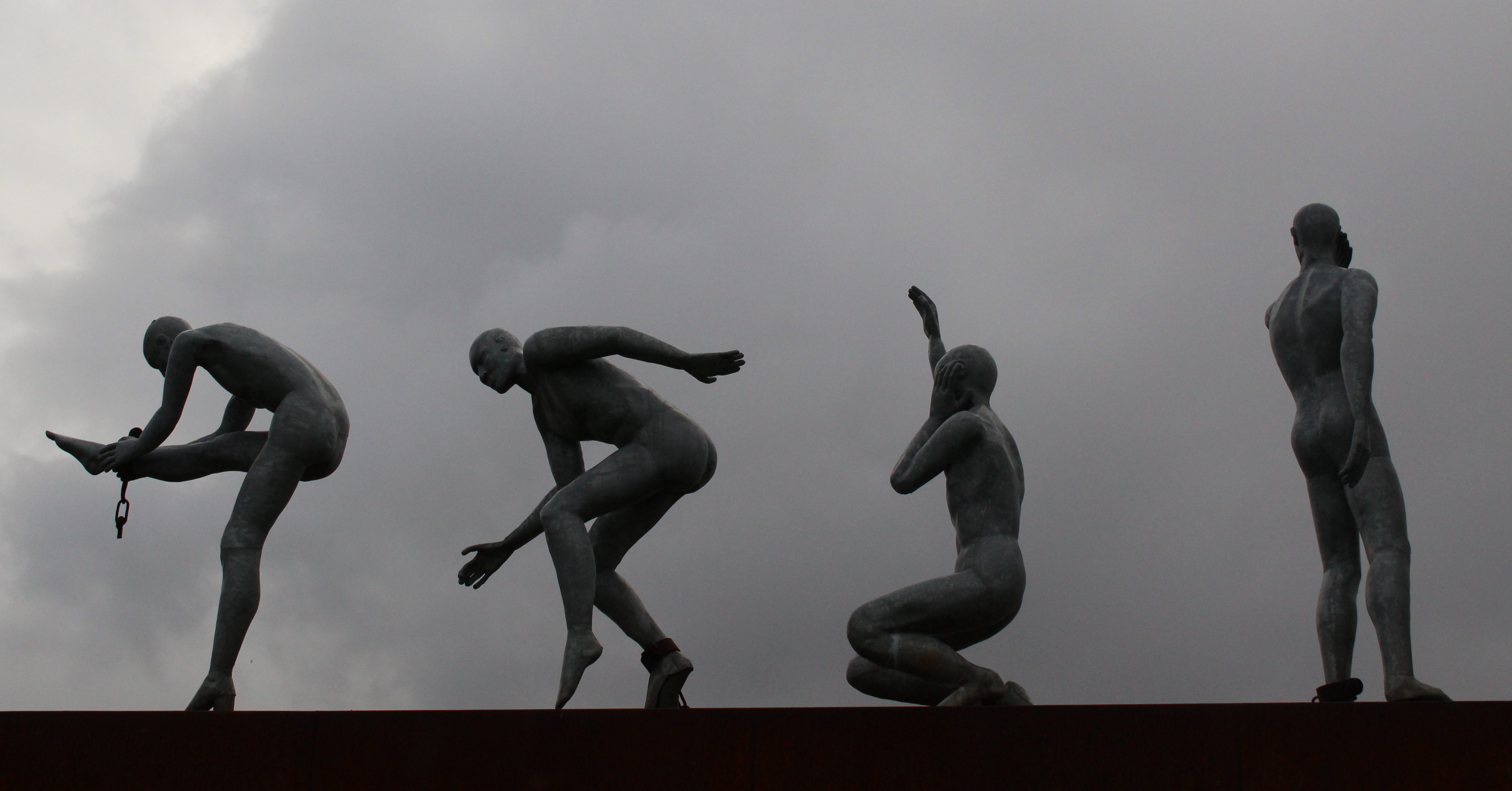 This is the second of a three-part series which will delve into slavery as a narrative of the past, however with (frequently overlooked) legacies in the present. I will use these series as a space for reflections that will travel back and forth between past and present, current and less contemporary events. The focus will be mostly on Portugal; the Dutch context, however, will also be considered. Portugal, where many of my social and cultural ways of thinking and being were first developed. The Netherlands, where for almost four years my place in the world as a Portuguese-British, white, European female individual has been developed and inspired, but also challenged and at times disenchanted.

If the first part of this blog series delved into Portugal’s denial of its colonial past, this second part will explore how this silence is being contested in Portugal today and why. In Part I, I explained how a large part of Portugal’s population dwells on the “Age of Discoveries” while denying its intrinsic link to the country’s imperial and colonial past, and (most importantly) while ignoring the social consequences of this denial. But certain groups in Portugal – and their voices – are becoming increasingly loud and visible.

These are voices demanding and fighting for change, which for many involves a public recognition that certain injustices of the present are rooted in the past. A past of colonialism, exploitation and enslavement. A past which is – I repeat – undeniably connected to the narrative of the “Discoveries”. And a past that lingers on today through society’s “cultural archive” and in the form of institutionalised racism. Before change can truly and productively take place, Portugal as a nation must first accept, reflect and take responsibility for its past.

This connection between past wrong-doings (and coming to terms with them) and present day social inequalities and discrimination is nothing new or surprising. In her book ‘White Innocence’, focusing on the Dutch context, Gloria Wekker explores what she terms the “colonial archive”, or a repository of knowledge and of structures of thinking and feeling, which in the “West” are characterised by inequality in thought and affect based on race. Formulated (especially) in the nineteenth century in the context of Europe’s imperial project, this archive continues to support dominant ways of interpreting, knowing and feeling. Although her analysis is based on the Netherlands, much of what she writes can quite easily be transposed – while adapted – to the Portuguese context.

Wekker explains how to take responsibility for the past means to stop being innocent. An innocence which is at the heart of Dutch culture. An innocence which speaks of a crucial paradox of society and culture in the Netherlands: the present-day denial of former colonial violence and of racial discrimination which lives alongside racism and xenophobia. Much like the Netherlands, so too does Portugal remain stubbornly innocent (in its view of itself). And it is this innocence, and associated racial discrimination, that groups in Portugal today are passionately challenging. And in Portugal that means (amongst many other efforts) opening up a critical discussion and revision of the long-lived myth of the Discoveries.

How then, is Portugal’s innocence being contested today? How are dominant colonial narratives being challenged? And by who? To answer these questions and to reflect on the idea of activism in the context of cultural heritage and memory I will focus on the creation, adaptation or even destruction of public monuments, namely in the form of sculptures or statues. Public monuments are used to make certain narratives and memories visible or tangible, while simultaneously attempting to render the respective individuals and communities (and their needs, wishes, hopes, emotions) heard.

Public monuments can be seen to represent and make tangible a range of issues, topics, peoples, places, events of the past. They can be created to unite people as much as they have the potential to divide them. Hence when reflecting on the use of public monuments, this constitutes not only an issue of erecting statues, but often also of adapting or entirely removing statues, monuments or memorials which come to be seen as socially divisive, inappropriate or offensive. Think for instance of the controversy regarding the statue of Cecil Rhodes in South Africa, following many others. Other times, memorials can become the battle grounds for public yet crucial debates about sensitive parts of a country’s past which remain unresolved in the present. Think for example of the Valley of the Fallen memorial in Madrid and the controversy regarding the tomb of Spain’s dictator Franco.

But my focus here is on Portugal and on the potential of public monuments to readdress the country’s colonial past and its current day social inequalities and racism. The country does not yet have a public site of memory – a statue, a monument, a memorial – that remembers the country’s slavery past, the victims of this historic atrocity, and victims of today’s racial discrimination. A discrimination which, I would argue, stems from Portugal’s cultural archive, developed through centuries of colonialism. The Netherlands, by contrast, has at least three slavery monuments – in Amsterdam, Rotterdam and Middelburg. This doesn’t mean that the Netherlands deals with its slavery past in a sufficient and reciprocal way – far from it. But the creation of these monuments has enabled opening up of many necessary and long-silenced debates surrounding the country’s colonial, and more specifically, slavery past. See for example the case of Rotterdam.

As mentioned in part I of this series, at the end of 2017, the Djass – Associação de Afrodescendentes (an anti-racism organisation fighting for the rights of afro-descendants in Portugal)won a public competition enabled by the Municipality of Lisbon with its project to build a memorial to the victims of slavery in the city. It is important here to emphasise that this initiative came from a group of people with links to Portugal’s former colonies. Indeed, the same can be seen in the Netherlands. In their book ‘Post-colonial monuments in the Netherlands’, the authors explain how the creation of public monuments in the Netherlands linked to the colonial past is often related to the migration of people from the Dutch former colonies to the Netherlands. This migration brings, according to the authors, colonial history “back” to the Netherlands, along with new stories and perspectives about colonialism and slavery. Such monuments are therefore a way of materialising these stories and perspectives.

The authors also concluded that in most cases, the main reason for the creation of such a public monument was the need for acknowledgement. That applies also to Portugal. Indeed, one of the reasons that Djass proposed a monument to the victims of slavery was to enable descendants from Portugal’s former colonies (like Angola and Mozambique) to have a place in Portugal’s history.  Another reason for wanting such a monument is to be able to bring to life a much-needed debate about racism in Portugal today.

For Beatriz Gomes Dias, the founder of Djass, Portugal still needs to come to terms with the fact that slavery is not something that happened and stayed in the past. For her – and many others – there is a direct link between slavery, the forced labour that continued in Portugal’s colonies after the abolition, and present day racism in Portuguese society. Furthermore, an important goal for Beatriz Gomes Dias and many other activists in Portugal today is to challenge the dominant narrative of Portuguese identity. A narrative that, as I explained in part I of this series, creates a misguided and dangerous sense of pride in Portugal’s colonial past. Gomes Dias argues also that it is necessary to confront Portugal’s myth of the Discoveries, and render Portugal’s sense of identity and the perspective about its past inclusive to all of people’s histories, memories and identities.

The colonial past of Portugal is not just of the white Portuguese people. No, it is a past that is common to all of its present-day inhabitants, a significant part of which are descendants of the Portuguese colonial project in Africa. As of now, people of African descent are often not recognised – let alone respectfully acknowledged – as part of Portuguese society. But a monument to the victims of slavery, to be erected in Lisbon, will hopefully demonstrate that Portugal’s history goes far beyond its present-day borders and far beyond the white faces of its population. What the proposal to create a monument to the victims of slavery and the success of this public vote has enabled was the opening up of a public discussion about the slavery past. Furthermore, what the creation of such a monument also implies is a recognition that slavery is very much a part of Portugal’s past and present.

If the discussion surrounding this public monument – that so far exists only on paper – has already produced so many news articles and debates regarding Portugal’s colonial and slavery past, I personally cannot wait to see the impact of its tangibility in Portugal’s society today.