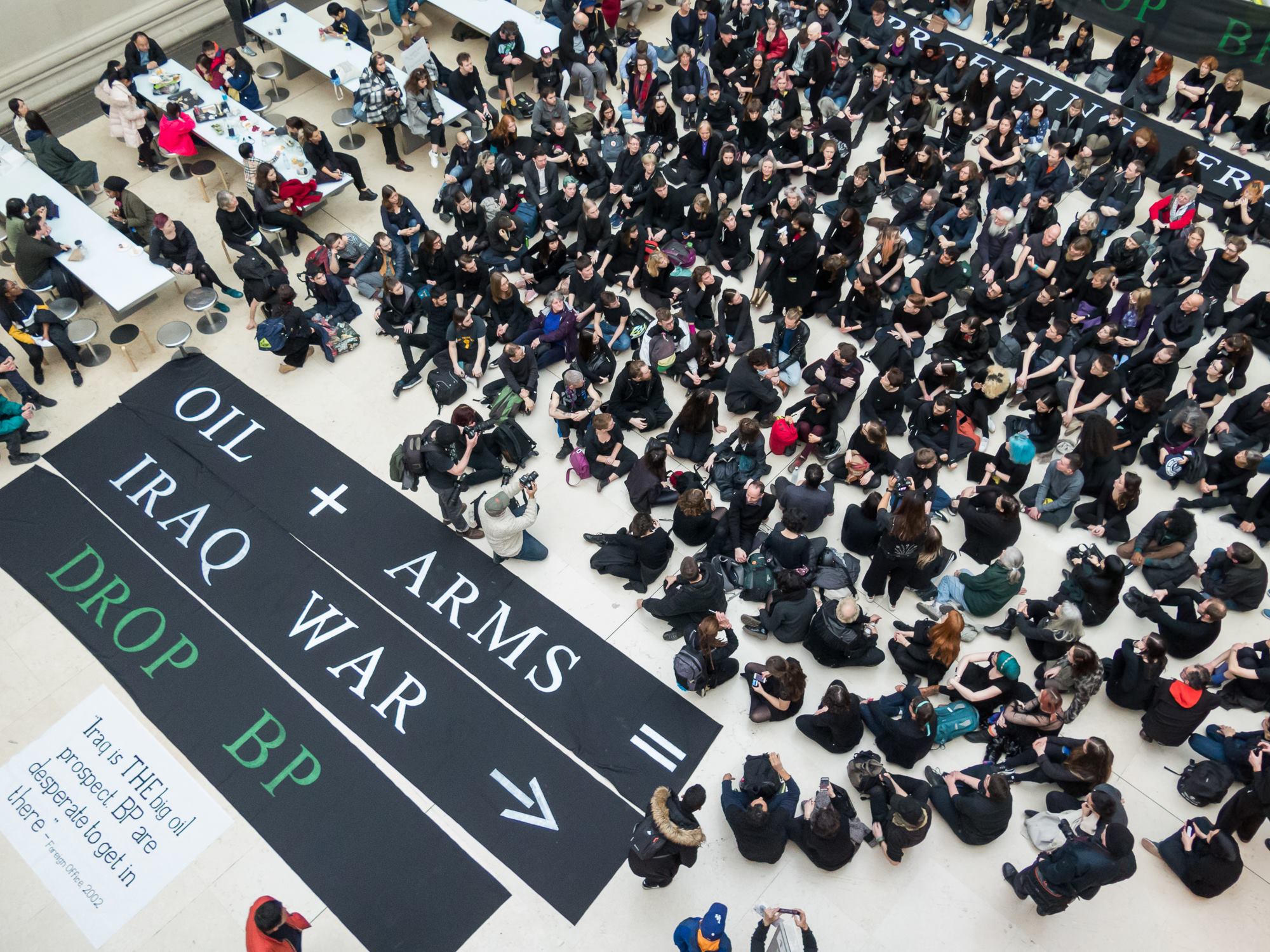 Earlier this year in February a performance protest was staged at the British Museum by the group BP or not BP?. It was a protest against the museum’s exhibit on Iraqi culture titled “I am Ashurbanipal, king of the world, king of Assyria”. The performance protest included a 200-metre “living artwork” with banners denouncing the sponsorship of the British Museum by British Petroleum.

This protest and earlier actions taken by the group often make the national news in the UK, with many journalists contributing their own opinions on whether museums and other cultural institutions should take money from Big Oil. Journalists, depending on the political leanings of their publication, end up on both sides of the debate. The question that hits the proverbial nail on the head is whether there is such a thing as clean money?

What should museums do?

Those in the heritage field and other public sectors are faced with dwindling financial resources from their respective governments, so the relationship with corporate sponsors and the communicated need for these relationships seem logical. The sponsorship relationship between the Tate and BP was ended back in 2016, and while this was treated as a step in the right direction by BP or not BP?, it’s clear that many cultural institutions still receive funds from Big Oil, including the Royal Shakespeare Company and the British Museum.

If companies like BP are looking to provide sponsorship, is it an opportunity to put the money to better use? This perspective has been put forward by commentators, but along similar lines to the group BP or not BP?, I think this assumes that museums are ethically or morally neutral or even good.

Museums have been embroiled in their own media controversies, mostly in relation to their attempts to decolonize their institutions. Robin Boast’s interrogation of contemporary museums calling themselves contact zones in order to insinuate that there is a process of dialogue and collaboration, emphasizes the continuing structural inequalities, born out of a history of colonialism.

Similar to ‘greenwashing’, which is making surface-level attempts to appear environmentally friendly in order to appeal to a certain demographic while not actually changing your practices, ‘artwashing’ goes beyond the idea that the sponsorship relationship is for advertising and visibility. Even though museums are navigating their colonial pasts and structures, they are certainly viewed more favourably than Big Oil.

This exhibit on Iraqi culture is a meeting point, or perhaps even contact zone, of the different arms of colonialism. The British Museum had previously been in the possession of looted artefacts from Iraq, and part of the explanation for the protest was that this exhibition was also made up of looted artefacts. BP’s role in Iraq is still being challenged today, as well as other oil corporations in different regions, for their contribution to oppression and conflict.

Yasmin Younis, one of the activists from the performance protest at British Museum, explains how BP contributed to the destruction of her home country of Iraq, and that seeing the BP logo alongside her treasured heritage made her feel outraged.

“Thus began several months of internal moral conflict for me, of wanting to visit the exhibition and enjoy the right to learn about my history and culture but feeling unable to do so, because purchasing a ticket felt like surrendering my dignity as an Iraqi and becoming complicit in BP’s campaign to ‘artwash’ its neocolonial business practices” –Yasmin Younis

As Yasmin clearly explains her position, I also wanted to explain my own positionality in relation to this issue. This performance protest or heritage activism captured my interest because of the questions it raises about ethical funding and the underlying societal structures which have made today’s museums possible. I’m also invested because I am someone who has directly benefited from the oil industry as a former Shell kid. I didn’t choose my upbringing, but the ethical implications of using money that stems from the oil and gas industry, even if it’s for ‘good’, are something that I am also facing in my daily life as I grow up.

The Future of Sponsorship

So what is the solution? Perhaps in the future there will be similar moves to legislate against advertising for the oil and gas industry, such as those that prevent advertising tobacco. Until then, it is clear that the first crucial step that we can all agree on is transparency. Even when sponsorship relationships were terminated, it was unclear which party made the decision. Progress will only have been achieved if the decision is made on the part of the museum as part of the larger ongoing processes of dealing with their own legacies. If it is the result of negative publicity and the decision lies with the corporation, the structures of the museum have not changed.

There is no such thing as completely clean money. Perhaps Big Oil money would be suited to solving the environmental problems it helped create, but in reality this becomes a contradiction of a situation if the corporations continue to pollute. In the case of the British Museum and the Iraqi culture exhibit, I agree with the standpoint taken by the performance protest. The museum cannot possibly challenge its own colonial past and structures if it reproduces historical (though recent) colonial relationships. The lack of transparency undermines the integrity of the exhibit, as visitors and commentators question whether the intertwined history of oil (including BP) and Iraq were excluded, purposefully or not. Museums should not wait for protests before disclosing the details of sponsorship relationships.

cover photo: by Safa Kadhim, courtesy of BP or not BP?