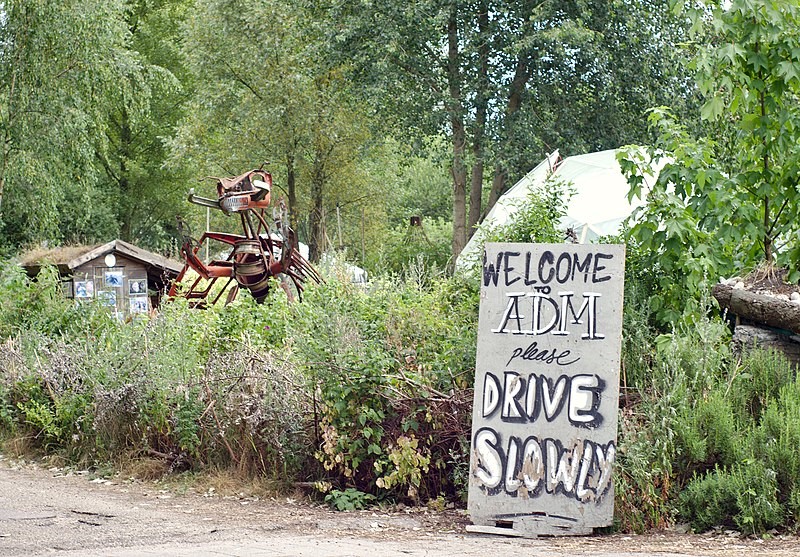 Amsterdam, why are you cutting down the very branch on which you were sitting? Soon there will be no wild branches left on your tree and you will join the rest of the forest – uniform and tamed.

The eviction of ADM – one of Amsterdam’s last free havens and squatting communities – and more generally speaking the growing number of anti-squatting legislations since 2010, are a perfect example of the contradictions inherent to the city’s administrative council: wanting to attract more people and investment to the city while simultaneously attacking the very things that made the city attractive in the first place. The mayor says she wants to promote Amsterdam’s alternative heritage, but it is clear that she only wants to do so as long as the latter does not disturb other greater goals such as population control and profit making.

ADM – a haven for creativity and spontaneity The ADM (Amsterdamsche Droogdok Maatschappij or Amsterdam Drydock Company) terrain was an active shipyard until it became unprofitable in 1977. Due to legal restrictions on its commercial use, the terrain was left unused until a squatting community started to re-appropriate the land in 1997 which marked the beginning of the ADM community. The next two decades saw the proliferation of creative, sustainable and innovative projects including radio stations, recording studios, art and music festivals, reforestation of the land to name but a few. But above all was the creation of a strong and self-sustainable community of people. To the sadness of its inhabitants as well as anyone who ever set foot on ADM terrain, the real estate company Chidda BV’s plans to empty and sanitise the land was approved which lead to the forced eviction of the ADM community just two months ago.

During the years of debate and trials over the future of ADM, one of the potential solutions presented by defending parties was to enlist ADM as an Intangible Cultural Heritage – a proposition that was finally rejected by the KennisCentrum Immaterieel Erfgoed Nederland. Seeing as ADM presented a unique form of urban community living as well as countless forms of creative and ecological skills, its intangible value seemed endless, making it the perfect candidate to be inscribed on the country’s List for Intangible Cultural Heritage (ICH). Although the integration of ADM on the ICH List would have avoided many people losing their life-long homes, it seems to me that ADM’s heritage would have nonetheless faded and eventually been destroyed in the long run. Why? Because of the inherent incompatibility between informal types of heritage and current official heritage frameworks.

Before I explain why I think the two entities are inherently incompatible, I would like to remind the readers that each squatting community arises out of its own specific context and from different motivations. Scholars of urban and social studies such as Hans Pruijt in his article The Logic of Urban Squatting, have identified 5 main types: deprivation based squatting, squatting as an alternative housing strategy, entrepreneurial squatting, conservational squatting and political squatting. In my opinion, ADM combines elements of each type, making it a particularly interesting case study.

This categorisation of squatting types, although useful in getting a better understanding of the phenomena, is something that would have been used counter-productively should ADM have made it on the ICH List. Under current heritage frameworks, intangible cultural forms are selected according to a list of criteria thus creating a division between ‘real’ and ‘fake’ versions of a heritage. In the case of informal squatting, it is far more likely that communities fitting into types 2,3 and 4 would have been more likely to get protected by formal legislation, as they would have presented less of a threat to the public order and the social hierarchy. The sanitisation of informal urban communities would have been further accentuated by the rules and restrictions that automatically accompany protection schemes. Squatting is based on spontaneity, anti-consumerism and thinking out of the box, all of which being difficult to maintain under governmental supervision as one can see by the way street art and graffiti is suffering from its institutionalisation. On the right, a decontextualised Banksy (Mick Garratt – Attribution-ShareAlike 2.0 Generic) and on the left, an appropriated Banksy (Amanda Farah – Attribution-nonCommercial-NonDerivs 2.0 Generic License from Creative Commons 07/07/2007)

The growing recognition of Banksy’s street art as heritage has led to its sanitisation as well as its extensive commodification and appropriation by the ‘creative industry’. Attempts to protect Banksy art works by removing walls, installing glass shields or removing all other surrounding graffiti not only decontextualizes them, but also freezes them in time and prevents them from entering into dialogs with other artists or people in general. And is the Banksy exhibition at the MOCO Museum in Amsterdam not the height of commodification and de-contextualisation?

The future of squatting, like that of street art and graffiti, in my opinion is not dependent on protection through frameworks such as the ICH or ‘DIY’ heritage approaches (see Samuel Merrill’s Keeping it real? Subcultural graffiti, street art, heritage and authenticity), but rather on a higher level of urban tolerance and the relaxation of existing rules rather than the creation of new ones. Starting to treat squatting as intangible heritage will act as a plaster and an excuse for the authorities to continue being market and profit driven not only in their approach to housing but also to culture in general.