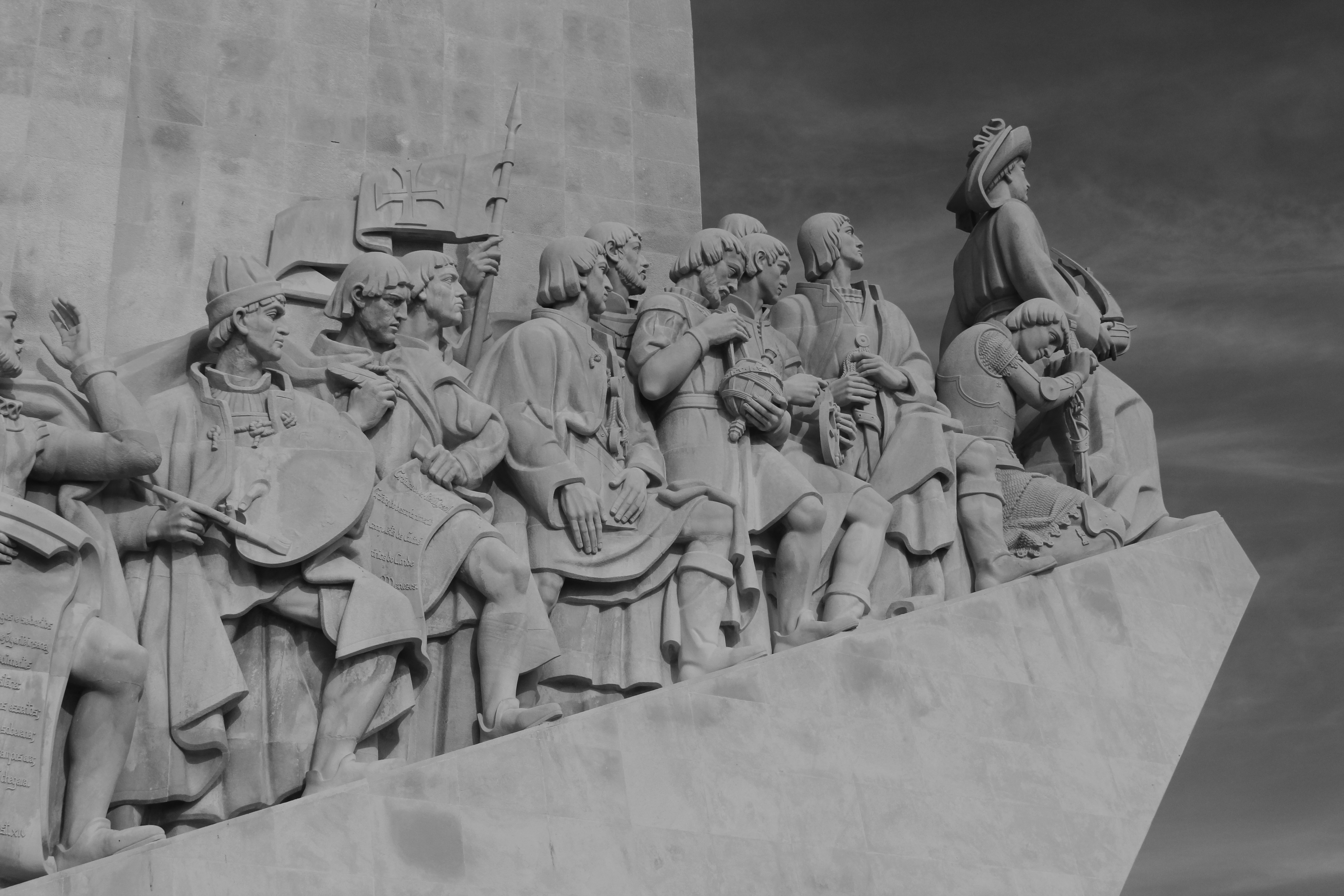 This is the first of a three-part series which will delve into slavery as a narrative of the past, however with (frequently overlooked) legacies in the present. I will use these series as a space for reflections that will travel back and forth between past and present, current and less contemporary events. The focus will be mostly on Portugal; the Dutch context, however, will also be considered. Portugal, where many of my social and cultural ways of thinking and being were first developed. The Netherlands, where for almost four years my place in the world as a Portuguese-British, white, European female individual has been developed and inspired, but also challenged and at times disenchanted.

At the end of 2017, the Djass – Associação de Afrodescendentes (an anti-racism organisation fighting for the rights of afro-descendants in Portugal) won a public competition enabled by the Municipality of Lisbon with its project to build a memorial to the victims of slavery in the city. Portugal is one of the countries in Europe that most significantly contributed to the transatlantic slave trade. But this is a past that most people in Portugal don’t (want to) know about. This (selective) ignorance could be seen as the result of the persistence of the myth that the country was a “good coloniser”; an idea deeply propagandised during Portugal’s twentieth century far-right dictatorship, and perpetuated in history classes today. This is done through positively narrating Portugal’s colonial – or maritime – past, while almost entirely neglecting the country’s slavery past. I can still remember learning about slavery during history class as something so insignificant as to be mentioned only the lines of “the Portuguese traded in spices, slaves and other products…” Slavery – and the victims of slavery – were made invisible and silent to us at school. Even at university, where I did a Bachelor’s in Archaeology, courses such as Colonial Archaeology were almost entirely focused on the many fortresses that the Portuguese planted along the coasts of Africa and Asia. A critical view of the colonial period and of Portugal’s contribution to the transatlantic slave trade were, as far as I can remember, absent.

Also at the end of 2017, the president of the Municipality of Lisbon, proposed to create a Museum of the Discoveries. The latter event sparked a critical debate about the “Discoveries” on news media on an unprecedented scale. This was mostly carried out in Portugal (e.g. here and here), but it also reached the international news media (e.g. here, here and here). The so-called “Age of Discoveries” constitutes the period in Portuguese historiography between the fifteenth and sixteenth centuries during which different actors (such as monarchs and navigators) developed and implemented politics of expansionism and maritime hegemony. According to legend – and to history classes – this was the time when the brave Portuguese navigators and their caravels pioneered the discovery of new lands and peoples across the world and spearheaded the “globalisation” process. Many people argue that to talk about the Discoveries is not the same as to talk about colonialism. According to this argument, the Discoveries refers only to the period of time when the Portuguese were exploring the world and putting new places on (European) maps. I disagree. One cannot dissociate the “Discoveries” from Portugal’s colonial project, as these are but different chronological parts of the Portuguese (and broadly speaking, European) colonial project. The narrative of the Discoveries therefore epitomises Portugal’s highly selective view of its colonial past.

The problem with this myth – I mean, narrative – is that it plays a central role in national culture and heritage, and most importantly (and problematically) in national identity and pride. It is not uncommon to hear Portuguese people proudly and innocently explaining to foreigners that “we put half the world on the map” or that “it is because of us that Brazil and so many other countries speak Portuguese”. Interestingly thought, this is a narrative that – much like the myth of the “good coloniser” – gained enormous strength during Portugal’s far-right dictatorship of the previous century. At that time, it was used to justify and help Portugal retain its colonial territories, at a moment when the country was increasingly pressured by the international community to grant independence to its colonies. Despite the end of the dictatorship in 1974, the independence of the colonies, and the ensuing process of democratisation, the myth of the Discoveries has not lost its strength. The almost direct link between twentieth century colonial discourses and current day national pride is epitomised in the well-known Monument to the Discoveries, located in Belém. Built in stone in 1960 during the dictatorship, it is today one of the most visited monuments in Portugal, and especially Lisbon.

The idea to create the Museum of the Discoveries is just another example of the perpetuation of the narrative of the Discoveries as Portugal’s national myth. And this discourse isn’t only used within socially and politically authorised circles – namely those that decide school’s history curriculum and that manage heritage and museum sites in Portugal. It is such a powerful discourse that it’s uncritically applied, time and time again, to the most banal – yet no less damaging – contexts. One very recent example of that is the new advertisement for Quinas, a Portuguese brand of beer. This advertisement showed the contour of Africa designed on the foam of a glass of beer and underneath it reads: “Portuguese are conquerors. They like to leave their mark wherever they go through”. The brand’s website boasts:

The Quinas emerges as a way to spread Portugal to the World and to promote the spirit of conquest that Portugal has in its DNA. Its name invokes our origins, the discoveries, the flavor of the conquest and the strength that represents our country.

The problem with the Discoveries narrative is that it is so emotionally loaded – indeed almost sacred – that many prefer to leave it untouched by critical hands. (The whole discussion surrounding Black Pete in the Netherlands comes to mind here). The “excuses” mentioned above – the Discoveries and colonialism are different things and the myth of Portugal as a benevolent coloniser – are used time and time again as protective measures; as a way to close up any possible fruitful discussion. But from what or from whom is this narrative being protected? And why does this narrative need so much protection in the first place? I argue here that while continuing to contest the dominant Discoveries narrative and Portugal’s view of its colonial past, it is also important to delve deeper into the emotional, psychological and sociological issues surrounding this persistent narrative. That there is so much resistance to criticism – let alone to revision and change – is also worthy of attention. It would be relevant to question what it is about current day Portugal – and its view of itself – that makes collective memories and narratives about the Discoveries so engrained and stubborn. Could this be a case of “ontological security”? Or, from a (collective) psychological point of view, a “dissociative tendency”? Or simply a lack of confidence in Portugal’s current state of affairs or an inferiority complex that requires looking back at “glorious times” for comfort?

A consideration for the reasons behind the strength and the need for Portugal’s national myth could potentially enable a more productive discussion. I often get the feeling that discussions such as the ones surrounding the Museum of the Discoveries are following parallel – and hence often irreconcilable – routes. Under the surface, those who defend the narrative of the Discoveries might actually be trying deal with issues such as today’s fast-paced societal, cultural and economic changes. While those advocating for the critical review of the Discoveries might actually be advocating for social, cultural, political and economic recognition. I’m not saying we should stop contesting dominant narratives. But if different groups are talking (consciously or unconsciously) about different things, then an understanding of both sides of the discussion will never be possible. And hence an honest, productive and long-lasting change might be very difficult to achieve.