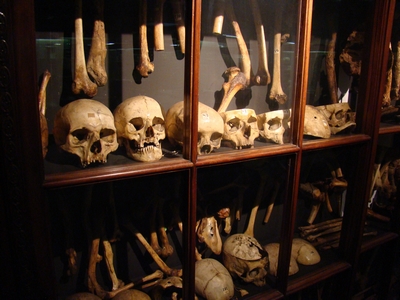 The Museum Vrolik is not a particularly easy place to find. It is tucked away within the Academic Medical Centre, which is itself quite far off the beaten trail, particularly for tourists. Even once you enter the AMC building, you have to look carefully for any kind of directions.The entrance to the museum itself is so unassuming that I found I walked past it at least once in my search.  But in the Vrolik’s defence, it would hardly have been a good idea to place any of their exhibits at the entrance as a kind of visitor enticement – it is, after all, a museum that is largely dedicated to pathological anatomy. It contains scores of skeletons, most of them belonging to people who suffered some kind of congenital deformity in life (in cases, that is, that they were born alive). Then there are the many ‘specimens’ – that is to say, human infants – floating eerily in large, clear jars, hugging their knees as they would in the womb, or in some cases seeming to reach out and touch the inside of the glass. As with the skeletons, most of the chemically-preserved bodies have some kind of genetic deformity: there are several examples of conjoined twins, and at least two of cyclopia.

But the undeniable fact that the contents of the Museum Vrolik might well prove too gruesome or upsetting for many tourists is not, I think, the main reason it keeps a low public profile. I don’t believe that those running the Museum Vrolik care a great deal about visitor numbers. While it is open to anyone, it is primarily used for research and education by staff and students of the Academic Medical Centre. However, I think there is a strong motivation among museum staff to ensure that the Vrolik should not slip into the trappings of a freak-show. A museum dedicated to pathological anatomy is bound to draw a similar audience to a freak-show – those motivated by a morbid curiosity, a peculiar desire to be disgusted, or even the desire to feel more comfortable with one’s own body by comparison.

It makes sense that the Museum Vrolik would not try to reach out to these audiences, as it much harder – ethically speaking – to justify the display of human remains when it appears to be done for entertainment, instead of education. The ethics of publicly displaying genuine human remains is inherently controversial, but if it is done in the name of education it is far less likely to provoke the ire of the general public. Many museums – particularly science museums – have in recent years made efforts to combine education with entertainment, making use of live demonstrations, multimedia presentations and other interactive elements in order to attract new audiences that would otherwise show little interest. The Museum Vrolik has eschewed such innovations, and it is not hard to see why. Combining education with entertainment is an often effective way of drawing audiences in to a topic they would not otherwise be interested in; however, this use of ‘edutainment’ has a tendency to trivialise the subject at hand. For some topics this is not an issue, but when the subject at hand is death and illness, it becomes necessary to show a little more sensitivity. This is demonstrated by the frequent controversies that follow the massively successful and widely-imitated Body Worlds exhibits. The questionable educational value of these exhibits has meant that, to this day, people still accuse it of being tasteless and exploitative.

So how is a museum to avoid such accusations? The Museum Vrolik starts by clearly stating near its entrance that all forms of photography are strictly prohibited. Just below, visitors are sternly called on to remember that ‘these were once people’. That this seemingly obvious reminder would be considered necessary by the museum is in itself interesting, if not exactly surprising. Any museum that attempts to portray the human experience – be it an anthropological museum, a historical museum or an anatomical museum – will likely face the accusation that they are dehumanising their subject. This is because the human experience is defined by an ever-changing context, and when an aspect of it is preserved and displayed, the context becomes entirely static.

In many colonial-era anthropology museums, such as The Pitt-Rivers Museum in Oxford, the significance of many of the tools, weapons and religious totems in the collection is not well conveyed, as they have been robbed of their context. Such objects are defined by how they are used, and when they are on display they are not in use, and thus are deprived of meaning. The same applies in an anatomical museum: from most perspectives, the significance of the human body lies in how it is – or was once – used. Think of Hamlet gazing into the empty eye-sockets of Yorick: he does not comment on the skull itself, but rather thinks back to the living, singing jester to whom it once belonged. But the location is key: Hamlet was soliloquising in a graveyard, a place devoted to the very human act of commemorating the dead.

Human remains displayed in a museum serve a radically different purpose – in the case of the Museum Vrolik, to illustrate various parts of the anatomy, as well as the various pathologies that can afflict it. As of writing this article, most of the remains in the Museum Vrolik remain unlabelled, but the ones that are are named for their illness. The skeleton of a baby who had Brittle Bones was referred to simply as ‘Osteogenesis Imperfecta’ (the scientific term for the condition).

It is hardly surprising that the Museum Vrolik would show little interest in the human stories behind the remains – it is, after all, a museum dedicated to science. But it does beg the question – why have they then forbidden photography and taken other steps to ensure a ‘respectful’ attitude is maintained around the exhibits? There does not seem to be any science-based reason to remind visitors that ‘these were once people’. I see it as an uncommonly direct answer to the dehumanising effects of public display I previously discussed. Most modern museums have tackled this issue by actively providing context to their exhibits, through multimedia presentations, demonstrations and talks by people who have strong cultural links to the collection. The Pitt Rivers Museum, wherein exhibits are presented as existing outside of the human experience, is now largely an anachronism. It is hard enough for a museum to try and convey the richness of experience contained within a single cultural object, but how can they be expected to do justice to the essentially infinite experiences that are represented by a human body? The answer is simple: they can’t.

Unlike historical and anthropological museums, experiences cannot be employed as a way of enriching the understanding of the exhibits in the Vrolik. No form of media can come even close to conveying the intensely personal experiences of pain, illness and dying that are contained within the bodies on display. Any attempts by the museum to recreate these experiences would undoubtedly come across as some crass form of entertainment. For most museums, being labelled ‘entertainment’ is not a problem, so long as it is combined with educational aspects. However, such a label would be an anathema to those working at the Museum Vrolik. This is because associating the term ‘entertainment’ with a place that houses people who are ‘deformed’ will inevitably result in the serious accusation, mentioned earlier, that it is a ‘freak-show’. The Museum Vrolik has therefore eschewed all things that might make it seem like a destination for those seeking entertainment – it has a low public visibility, bans photography, and makes no active attempts at engaging those who do not have a prior interest in pathological anatomy.

All this is not to say that every visitor to the Museum Vrolik comes with the sole intent of being educated. It can still be seen on several websites that recommend institutions for people who get some kind of thrill out of being shocked or disgusted, including the new trend of so-called ‘dark tourists’. But by firmly disassociating itself from such trends, as well as the fashion for ‘edutainment’ and ‘experience-based learning’ so often found in other museums, the Museum Vrolik has largely stayed free of accusations of exploitation. By simply stating ‘these were once people’, it has retained a scientific detachment that ensures it does not in any way resemble a freak-show, while also gently encouraging visitors to view the exhibits in a more humanistic light.

There is absolutely nothing wrong with museums using ‘experiences’ as a way of enriching the visitor’s understanding of their exhibits. However, some experiences simply cannot be recreated, or even imitated, within a museum space. Attempting to get audiences to relate to an experience they cannot even imagine is not only pointless, it also risks coming across as insultingly reductionist. Sometimes, a museum has to take a step back and trust that its visitors are capable of empathy and introspection.