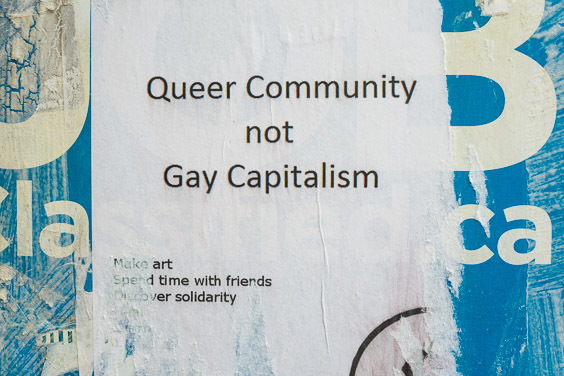 The term commodification seems to kill people’s vibe immediately. Throw it into any conversation and see how people roll their eyes almost instinctively at you.

This isn’t so much because it’s a particularly complicated concept to grasp, but because it’s been unfortunately overused in the millenialization process of practically everything around us. However, using the term is inevitable when addressing any issue caught in the estuary of culture and globalization. It appears that when a certain culture or sub-culture is incorporated into capitalism and the global market economy, it can be rapidly hollowed of all meaning, being left to stand only on its exterior shell and marketable props (insert hashtag of choice).

Such appears to be the case of the LGBTQI+ movement, particularly during the Pride month of June, when sexual minorities gather to celebrate the freedom to be themselves. Now let’s throw in the dreaded C word into the mix: is there such a thing as commoditizing a sexual orientation? Well, it’s 2018… so, of course, there is. Particularly if it holds the key to billion dollar profits. The answer is a jazzy term that experts refer to as Pink Capitalism (so basically the same old capitalism we know and breathe but with rainbows all over it).

Sarcasm aside though: you’d think companies adhering to a cause that fosters inclusion and diversity would be something to simply celebrate, right? I thought so too. However, and as Christi Sessa points out in her post titled The Business of Pride: how much do the brands selling us rainbow studded everything, from thongs to defibrillators, actually know/care/believe in Pride? How much is too much? In his most recent book, How Gay Culture is Changing the World Frédéric Martel gay liberation often begins through commerce and the market, but how much is too much?

Beyond the glitz and glitter, Pride is more than a celebration. It commemorates a struggle, a protest, a commitment. It remembers the past and builds a future where no one has to ever hide their true self again. So is it wrong for companies to use Pride in their marketing strategies? Absolutely not. As long as they truly believe in the cause. As long as their focus goes beyond white, middle-class, male gays, and truly stretches to trans, inter, bi and +. As long as they are as eager to use the rainbow in their packaging as they are to hire diverse members of staff. As long as they know what the rainbow stands for (beyond the cash). As for us, consumers, I suppose the message is to look beyond the rainbow. To use our exhaustingly easy access to information to find the true colours of corporate rainbows (pun very much intended), and to boycott free-riders. The paving of this path has been far too hard for anyone to take it for granted. Furthermore, if the path is ever to become a proper road, anyone using it has to chip in.

Authors such as Martel suggest we are currently experiencing a ‘gay revolution’. Others suggest the same regarding gender, and most recently sex. It’s up to us, consumers, to make sure that brands adhering to human rights movements are, to quote Adidas, ALL IN.