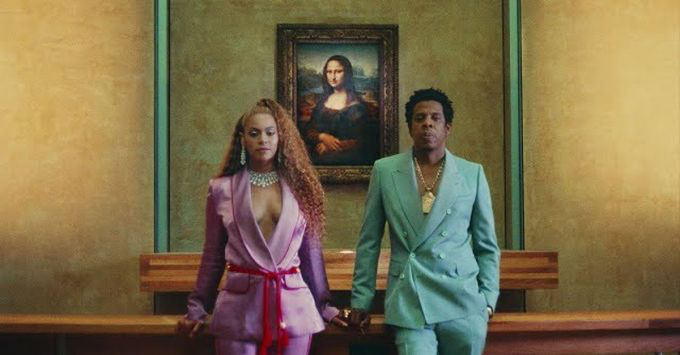 On June 16thmy Facebook feed was -to say the least- buzzing about The Carter’s APES**T music video, which was filmed inside the most famous and most visited museum in the world: The Louvre.

Directed by Ricky Saiz, the 6 minute clip shows Beyoncé and husband Jay-Z performing alongside 15+ dancers with the impossibly regal backdrops of some of the world’s most recognizable works of art: the Mona Lisa, Victory of Samothrace Landing, The Oath of the Horatii, The Great Sphinx of Tani, The Consecration of the Emperor Napoleon and the Coronation of Empress, The Intervention of the Sabine Women and Madame Récamier, Pietà and The Raft of the Medusa among many, many others. While I’d love to have the academic knowledge to execute a savvy semiotic analysis of each work of art featured in the clip in juxtaposition to lyrics and art direction (one can dream), my analysis has more to do with the fact that this isn’t just about Beyoncé and Jay-Z, but about Beyoncé, Jay-Z and The Louvre, or maybe even about Pop Culture and Museums in general. Sorry Beyoncé.

I must firstly admit that I’m not a museum fanatic, so this may not apply to museum lovers. I get easily tiredexhausted, claustrophobic (I blame Stendhal Syndrome) and therefore limit my museum visits to 1-hour tops, which I thoroughly enjoy. The Internet, however, I can peruse for hours on hours without so much as a bathroom break (I blame millennial syndrome, which I just made up but I’m sure is a thing). Anyway- even I felt like going to the Louvre again and again after watching The Carter’s clip. It could be that I’m just a sucker for pop-culture, or it might be that pop culture has the innate dynamism of adapting (for better or worse) to the present, something that museums often struggle with. It could also be, that our celebrity-obsessed society (in which I include myself) needs celebrity endorsement for culture in order to be engaged again. And not that the Louvre needs more visitors, but many museums around the world…do.

I hope Theodore Adorno doesn’t return to haunt me forever after saying this, but maybe its time we fully grasped the potential of using pop culture in favour of culture in general instead of as its antagonizer.