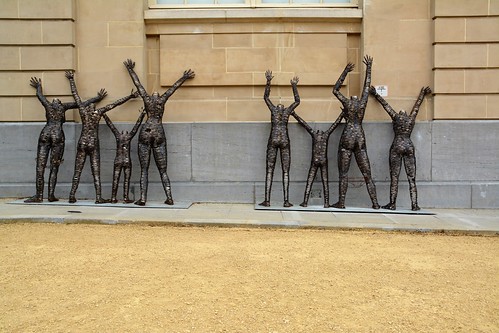 Coping with coloniality in (post)colonial Belgium

An iconic building in the middle of a park, next to a forest, housing a unique collection of natural objects and African cultural artefacts. The AfricaMuseum in Tervuren in Belgium has been known for its abundant collection of exotic taxidermy and impressive displays. In 2013 it closed its doors for an extensive five year renovation. Not just because the building and the objects needed some TLC and a dust brush, but also because the presentation and explanation of the collection was deemed outdated and needed remodelling.
After years of renovating, the museum was ready to host its long awaited reopening. With great pride the museum director showed the media around the newly added extension to the museum and the brushed up marble floors. Some rooms within the museum had been devoted to the controversial statues and some of the controversies of the Belgian history in relation to their former colony Congo.

Many critics, however, were promised a radically new course of the museum, that would be decolonised and welcoming for diaspora. They were not too impressed, sadly. Even though some harmful statues were taken away from the original displays and put into a separate room, informally called the ‘Shame Room’, the critics and diaspora couldn’t believe that the golden glorifying statues of the Belgian king Leopold II and inscriptions such as “Belgium bringing civilisation to Congo” were still celebrated on the rotunda in the palatial building. This, according to museum staff, is because of the heritage status of the building. So there was not much they could do about that. By taking away the negative statues, but preserving the positive, the museum now seems to simply push the harm and contested history of the museum to one separate room, while the visitors can marvel at the pretty glorification of colonial Belgium in the rest of the museum. An incomplete renovation and an incomplete decolonisation.

After a media storm of critique, the Africa Museum admitted that it had underestimated the process of decolonisation and had some more work to do to make sure their museum is the inclusive space that they have claimed to have become. They would pay more attention to sensitivity of the topic and make a bigger effort to steer away from the stereotypical presentation of black people.

Yet, only a few months after its opening, the Africa Museum is back in the media. Of course, after the debacle of the opening, all eyes are on the museum with every move. In the summer of 2019, the museum hosted a festival in its gardens. In the invite the organising agency told the visitors the dress code was African. The museum immediately sensed that this invitation could cause some controversial outfits and actually contacted the event planners. The latter were not so worried about the dress code and did not change their invitations. As the event eventually took place,  many visitors came in colourful traditional clothing and were wearing African inspired prints. But, sadly, there were also people that dressed up as ‘blackface’ or a ‘savage’. With a painted face and animal-print cloth around their body, they were embodying a negative stereotype of black people. An image that the Africa Museum had recently chosen to dismiss from its displays.

During and after the festival, several visitors posted about the insulting and racist aftertaste this gave them and how they were dissapointed to see such behaviour around the Africa Museum after it had promised to go into a new direction. Besides the dress code, people also disapproved of the stereotypical decorations that were chosen to represent Africa for the festival. The stages were dressed with skulls and on the poster there was a as an image of a giraffe on the savanna in sunset.

Obviously, the museum has had very little to do with the organisation of this event, and was already alerted about its possible controversy. It probably says a lot more about the Belgian people and their awareness and sensitivity for this subject. As they do not seem to see bias and racism as such a problem and do not consider the feelings of others legitimate as they are convinced that it does not exist as they not experience it.

This is reflected in yet another recent appearance of Belgium in the international media in relation to racism and coloniality. In the village of Ath, a carnival is organised every year. Le Parade Ducasse D’Ath. It is a local tradition with decorated wagons carrying different figures. One of the figures is the ‘savage’. A man, painted black, with a ring through his nose and a feather headdress. He scares the children alongside the route. It is a ritual to make the kids get rid of their pacifiers, which they hand over to the people in the parade, to be displayed and carried away on one of the wagons. Activists and people from diaspora have called for this tradition to be altered or abolished. They would like to see the ‘savage’ dissappear from the parade or have a different colour skin. As, according to them, the image of black people being wild and scary is being maintained and racist. There was only one problem, again. The celebration has heritage status, so it can’t be altered.

Another familiar case of a contested traditional celebration, is one that is also well know in the Netherlands. It is the celebration of Sinterklaas. An old white man, dressed in a christian velvet robe, that rides on a white horse, comes to the houses in the night to bring presents for the children that have been good. If this story reminds you of Santa Claus, it is not that weird, as that tradition was based on the Sinterklaas celebration. The difference is, however, that Santa is accompanied by reindeer, whereas Sinterklaas has a gang of black servants around him, that carry the presents, make silly manouvres and put naughty children in a sack to bring them back to Spain.

As is the case in the Netherlands, people in Belgium are having a hard time adjusting their heritage and traditions to modern times and new insights. When it comes to national and regional traditions, especially if they have been there for generations, people feel very offended when others ask them to change their traditions. Culture and traditions are part of our identity. The official parties, such as municipalities, governments and museum boards, are becoming more aware of the necessities to act on representation, inclusion and decolonisation. It is their responsibility to make firmer statements. As Stuart Hal poses in his article Whose Heritage?: “The National Heritage is a powerful source of such meanings. It follows that those who cannot see themselves reflected in its mirror cannot properly belong. Even the museums and collections apparently devoted to surveying the universal, rather than the national, achievements of culture — like the British Museum, the Louvre, or the Metropolitan Museum in New York — are harnessed into the national story.” (Stuart Hall (1999) Un‐settling ‘the heritage’, re‐imagining the post‐nationWhose heritage?, Third Text, 13:49, 3-13). Both in the case of the Africa Museum renovation and the Festival of Ath, the heritage status of the building and the event, prevented it from being altered which obstructs the chances of this heritage and traditions to be compatible with the current day and age and Belgiums current society. If action is not undertaken, the problems of present day coloniality will not disappear.

The most vivid memories a person has, are usually of family celebrations or national traditions. It is hard to have someone ask you to change it. But it is important not to forget that culture and traditions are alive. They are not static. Museums, but also people, ‘claim the heritage of the classical tradition for contemporary society and equate that tradition with the very notion of civilisation itself’ Carol Duncan and Alan Wallach have argued. (Carol Duncan and Alan Wallach, ‘ The Universal Survey Museum’, Art History, no 4, December, 1980, p451). With every generation and with every cultural progression, the celebrations and habits of people change. As people in the Western world become more and more aware of the actual meaning of racism, they still try to place coloniality and racism outside of themselves. Because of shame, because of ignorance? Who knows? But we better start looking in the mirror, because the world is moving on, times keep changing, so we cannot let our traditions stay in the past. To pass them on to future generations, means bringing them into the present day.