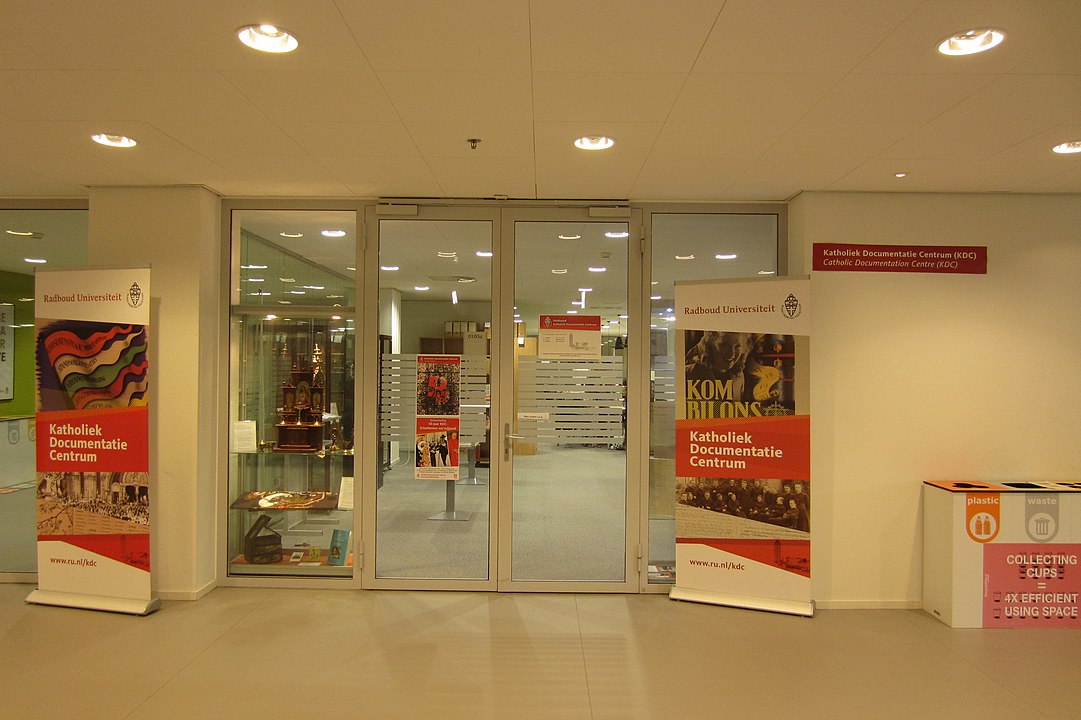 As I started my internship in the Catholic Documentation Centre (KDC), an organisation under the university of Nijmegen, I understood quickly that I am part of a renewal effort, an attempt by the organisation to perform a shift of its interests, as its initial role had become somewhat outdated.

The Catholic Documentation Centre was created in the context of the depillarisation of Dutch society in the 1960s, when many civic institutions of the catholic pillar – newspapers, trade unions, societies etc – began to be shut down. Whereas the archives of strictly religious institutions, such as the parishes, were held by the Church or by local archives after the institutions ceased to exist, the records of the civic institutions were likely to be trashed. Researchers were alarmed about the potential loss. Τhe then Catholic University of Nijmegen responded to this demand with the creation of the Catholic Documentation Centre, the KDC. In the past 50 years, the organisation has been saving all kinds of archives, pictures, recordings and videos, as well as artifacts, from oblivion. After the rescue operation they had the enormous task of classifying and finally making accessible the vast archives, which meant a period when KDC was less outwards-oriented.

Dutch society has continued to change from the time of the 70s and the depillarisation. This can be clearly illustrated in the political landscape. Political party membership has seriously declined and fewer voters identify now with parties based on religious traditions. In the last decades, the Netherlands saw the rise of a xenophobic right, which focuses on “European identity” and sees “Islamification” as a main threat. On the other side of the political spectrum, left-wing and progressive parties advocate for decolonisation and rights for minority groups. These developments illustrate the impact that mass migration has had in the country. The various migratory routes include starting points in the former Dutch colonial empire (Suriname, Indonesia, Antilles), southern Europe and Middle East (in the Gastarbeiders era but also more recently), Africa and southeast Asia, Eastern Europe, and, lastly, Syria and Iraq that were affected by civil wars. Some of these migrants are Muslims, and the public discourse is centred towards them, as an easily conceived “problematic” group. Though, there are also a lot who carry with them other religions, including Christianity.

In the new era, an archive interested solely with some semi-forgotten catholic institutions of the past seems clearly distanced from the present centre of the discussion – which can also mean a distance from public funding. That was the second problem that the KDC had to cope with, apart from the partial fulfilment of its original mission. Hans Krabbendam was appointed as the new director by the now renamed Radboud University (no longer the “Catholic University of Nijmegen”), with his primary task being to transform the KDC by reconnecting its holdings with current affairs. One of the answers that was given was the development of the “International diversity” programme.

This project aims to connect KDC with migrant catholic communities and raise awareness about the importance of documentation. One of the purposes is to include the archives of some migratory religious organisations to the KDC collections. A database of all the catholic migrant communities in Netherlands is also being built at the moment. These communities are more diverse than some may think. In terms of nations, in the database you can find everything from expected southern European communities to Vietnamese and Indian Catholics. But they are also diverse in terms of religious issues; there are some that follow different rituals, according to the traditions of eastern and oriental Christianism, and some that are not part of the Latin Church, but “unified with the pope”. One interesting example is the Ukrainian Catholics, who follow the byzantine ritual. Even more outstanding are the cases of Syriac and Chaldean Catholics, two different churches from an area which is split up between modern Iraq, Syria, Lebanon and Turkey. They make their liturgy in the Aramaic language, of which they are very proud, as it is considered the language spoken by Jesus Christ. Their native tongue however is Arabic. These churches derive from churches that separated from the rest of Christianity in late antiquity. Parts of these churches, which we use to group together as “oriental”, unified later with the Latin Church, forming the Syriac Catholic and the Chaldean Church.[i]

This shift in KDC’s orientation is not just a change of object. It is a radical shift from archiving the past to documenting the present and activating the past for the present. As the title of its strategic plan for the period 2019-25 suggests, the KDC wants to move “from collection to connection”.[ii] From my perspective, this is a difficult task. One challenge for the organisation is to adapt to a different way of working; everything seems to take ages in an organisation like this, as archiving consists of a series of tasks that must all be carried out meticulously. If you deal with the present though, this means that you will always be behind. The migrant communities that the database seeks to include are changing day by day; new local centres open, others close, their sparse material footprints may disappear in one day with the end of a rent contract. Perhaps a solution to this problem could be a more participatory approach. As for now, KDC’s practice is set within the limits of an outsider relation with the communities, waiting to receive their archives if a community wants them to “rest” in a safe place. In my point of view, this is not the best way to document communities who are actually in the midst of their active life, and in many cases under creation, as is the case for migrant communities. The archive of KDC works as of now more as a gentle grave for dying communities. This could well change.

In its strategic plan, KDC indicates a number of goals to address these problems for the entirety of their activities, not only for the “International diversity” programme. They are envisioning a shift towards a more active relationship with researchers, communities and non heritage-experts, a targeted and effective acquirement of sources, and a focus on the use of the collections rather than their enlargement.[iii] Following A. Assmann’s conceptualisation, we could say that KDC attempts a shift from an institution of passive memory, where past is preserved as past, to one of active memory, where past becomes present.[iv]

Nevertheless, a second barrier to this mission is the trust of the communities. It is unclear if the migrant communities will be very positive on engaging in a mutual learning relationship, let alone giving their archive to KDC. However, the very special nature of KDC can serve as an advantage. It has a lot of employees with a religious affiliation (not always catholic by the way, the chair is a Protestant) and has “Katholiek” in its name; on the other hand, it remains a secular organisation. Other options for a religious organisation concerning their archive (abandoning it or handing it over to a state depository) are less attractive, and KDC is expected to be more close to their preferences. Still, language and cultural barriers continue to exist. A key factor in the fate of that relationship are people that can act as connections. If for example KDC had employees from these communities it would help a lot the establishment of mutual understanding.

The ability to find creative answers to such problems will determine the future of the “International Diversity” programme and consequently of KDC.